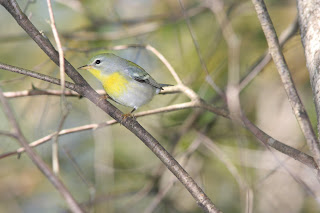 Northern Parula
I co-led a Hampshire Bird Club trip into the central part of Quabbin today. I will include a list and more details later but quick highlights included twenty Rusty Blackbirds, a Barred Owl perched on the shore of a small stream below eye level, four Ruffed Grouse including one drumming, etc. I'll include more details later.

Now that I have a little time I will include the list for the day and more details. The twelve members of the Hampshire Bird Club plus the spirit of the late Chris Ellison began the day at the Pelham Overlook and then tried to go to Gate 22 but our key didn't work so we then went to our next destination which was the restricted access area via Gate 20. This is an area of Quabbin few get to see so the trip is always full. The day started off warm and ended hot. The temperature at sunrise was over 70 and topped out in the 80's. The wind throughout the day did not create as many issues as originally feared...but it did keep our warbler numbers down as did the appearance of an accipiter at many of of our tried and true warbler spots. I guess the hawks know where the birds are too! Besides the many birding highlights we had some great looks at Coyote, a family of three River Otters and a family of deer plus the first black phase Gray Squirrel I have seen in this area of Quabbin. We had some fantastic birds but oddly missed some typical birds for this area like Red breasted Nuthatch and Black throated Blue Warbler. Its just the way it goes when you are out birding. As promised above here is the list for the day. The total number of bird species for the day was 76. A great trip with a great group of people. The only thing missing was Chris. He was at least there in spirit and I know he enjoyed the birds.