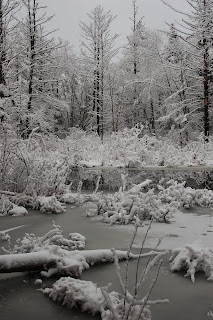 Not alot in the way of birds to report but I couldn't resist posting a few photos of the latest snowstorm. I did make a brief stop at Winsor Dam at Quabbin this morning to try and relocate the Common Loon that has been there. No luck on the loon but did have three Common Mergansers and a group of 56 Cedar Waxwings. At home I had a very vocal Pileated Woodpecker plus the first Red Winged Blackbird at the house this seaso 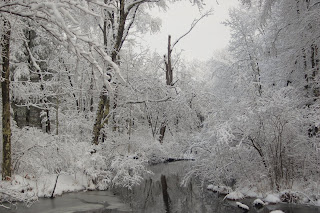 Cooper's Hawk in the snow 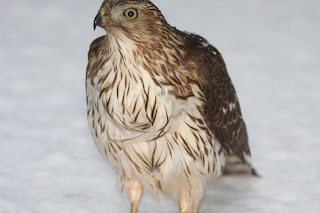 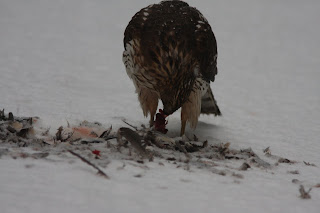 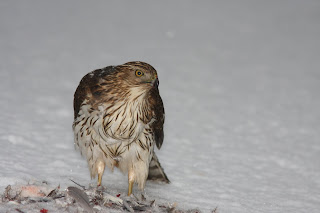 On my way to work during yesterday's snowstorm began with a spectacular site. A Cooper's Hawk was feeding on a fresh kill in the middle of my snow covered driveway. I initially didn't have my camera with me and I took a brief look through binoculars and then decided I needed to get going to work. I attempted to drive past the hawk but it was in no mood at all to move. I drove to within about 15 feet and it didn't seem fazed at all. After looking at the hawk for a few moments I decided I would back up the driveway and get my camera and see if I could get a few photos. I raced back up to the house and came back down to find the hawk still feeding. I drove to within 15 feet and leaned out the window to get some shots. The snow made it difficult to get as many shots as I wanted to get but I managed a few good ones. After several minutes I really needed to get moving so I drove closer. The hawk still would not move. I had no way around it so I inched a little closer. I was finally so close I could not see its full body past the nose of the car. I then leaned out and got a few more photos. It was so close at this point I could not fit the full body of the bird within the frame. As I was very rapidly becoming later and later for work I had to get by it. Only after I opened the door and moved toward it did it fly....about ten feet further down the driveway with the remains of the bird in its talons. It gave me a long look as I tried to inch by and it finally flew off into the woods to finish its meal in piece. A nice way to start a day despite the tough weather.
Posted by Larry at 4:30 PM 2 comments:

It has been about a month since my last post so I thought I would try and get a post on here today. The avian activity has dwindled down and my free time has done the same. I have a few sightings of interest to report from the last few days. The weather has been seasonable mild with daytime temps near 40 which has greatly reduced the snow cover. I have had a Winter Wren singing a partial song the last couple mornings at home. The wren has been around all fall and winter. This morning I made a stop at Covey WMA and Quabbin Park (Winsor Dam only). Covey had a group of eight Eastern Bluebirds together. Quabbin had a flock of 54 Cedar Waxwings, three Bald Eagles and a continuing Common Loon in one of the only open sections of water on the Quabbin. In addition a couple of Coyotes patrolled the ice out near Gate 5. A fairly nice morning to be out with little wind.
Posted by Larry at 9:31 AM No comments: