Managed a short walk before being driven back to the car by the deer flies, etc. Some interesting birds along the Belchertown Land Trust trail included a Field Sparrow carrying nest material and a several begging juveniles of various species.

Back at the house a pair of Broad winged Hawks flying low and calling provided great looks on this humid warm day.
Posted by Larry at 12:43 PM No comments: 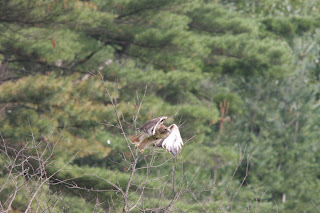 I spent a few hours saturday morning in Prescott surveying for the breeding bird atlas. I went less than half way down the Peninsula and concentrated most of my time in one block. Yet again some great stuff to be seen. I tracked down a group of three Evening Grosbeaks which were feeding in a large group of pines. The odd thing with this group is that it included a juvenile Rose Breasted Grosbeak which appeared to be following them around from tree to tree. The Rose Breasted seemed to be begging from one of the adult male Evening Grosbeaks but the Evening Grosbeak wanted nothing to do with him. It was strange behavior indeed. I also heard and then briefly saw two Red Crossbills. The lighting was bad and the fog didn't help. I was unable to determine age, etc of the birds. These were a few miles north of were I had a female feeding juveniles earlier this season. I also found groups of warblers that appeared to be forming into mix species feeding groups. Some truly fabulous looks at the various species of various ages. Again many juvenile birds were around including great looks at a Broad winged Hawk. The amount of song continues to drop off but a few birds still continue. Also had a Red Tailed Hawk perched in a small apple tree which took off as I approached and I managed a quick shot as it flew off.

Email ThisBlogThis!Share to TwitterShare to FacebookShare to Pinterest
Labels: prescott

An interesting giveaway from 10,000 birds. Worth a check.

I finally got a nice day off to spend out looking for some good stuff. Good stuff was certainly out there to be found. Although the bird song has dropped off quite a bit there are still some vocal birds out there and alot of birds to be found with a little looking. A nice traveling group of a dozen Baltimore Orioles together at Quabbin park was nice as were the several juvenile warblers of a few species feeding with them. Although I only spent a short time at Quabbin Park it was nice to get back in there.

The highlights of the day spent with a DCR biologist surveying for loons included a total of 13 adult loons and three chicks as well as an adult still on an active nest. Also had two large groups of Common Merganser ducklings with a total of 33 little guys (and girls). Another great bird for the day was a Merlin that shot past us being pursued by Eastern Kingbirds. The Merlin took a swipe at something on a sandbar and then continued south. An early migrant? Another possible breeder in the area? Who knows?
Posted by Larry at 4:55 PM 4 comments: 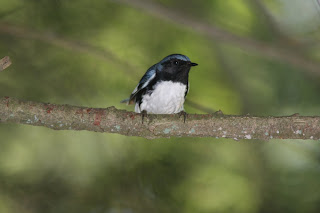 Spent four hours this morning birding the Prescott again for the breeding bird atlas. Nothing too unusual around today but still some nice birds. Managed to confirm a few more species. The most interesting sighting was of a Chimney Swift around a beaver pond miles away from any chimneys. I have had Chimney Swifts in this area for the last three years of the breeding bird atlas. As there are no chimneys for several miles in any directions I assume if they are breeding here they are using an old tree. I have looked briefly but have not had any luck. This is far from surprising given the vast area and the lack of easy access to much of it. Hopefully I will have some luck in the future. As far as non bird observations the number and variety of butterflies continues to increase and the number of bats roosting in their usual spot continues to decrease. In years past there would be dozens now its usually only a handful. Only three seen today.
I also hiked about a mile in gate 15 to try to find an Acadian Flycatcher. No luck on finding one but the area is in the midst of logging so they may not be nesting in their usual spot this year due to all the noise and activity.
In sad news some predator knocked down a bird house at the house containing the nest of a House Wren. Hopefully the wrens will try again.
Morning list.
Wood Duck 1
Hooded Merganser 6 three adults, three juveniles
Ruffed Grouse 1 adult
Wild Turkey 1
Great Blue Heron 1
Red-tailed Hawk 1
Mourning Dove 7
Chimney Swift 1
Ruby-throated Hummingbird 3
Belted Kingfisher 2
Yellow-bellied Sapsucker 20 several juveniles
Downy Woodpecker 7
Hairy Woodpecker 2
Northern Flicker 4
Eastern Wood-Pewee 4
Alder Flycatcher 1
Least Flycatcher 12
Empidonax sp. 1
Eastern Phoebe 3
Eastern Kingbird 6
Yellow-throated Vireo 1
Blue-headed Vireo 7
Red-eyed Vireo 57
Blue Jay 12
American Crow 4
Tree Swallow 183
Black-capped Chickadee 16
Red-breasted Nuthatch 12 a few juvenilesWhite-breasted Nuthatch 6
Brown Creeper 3
Winter Wren 2
Golden-crowned Kinglet 15 including one group of nine together...a mix of adults and juveniles
Veery 34 several juveniles
Hermit Thrush 2
Wood Thrush 9
American Robin 35
Gray Catbird 51
European Starling 1
Cedar Waxwing 33
Blue-winged Warbler 1
Yellow Warbler 7
Chestnut-sided Warbler 46
Magnolia Warbler 13 female carrying food
Black-throated Blue Warbler 9
Yellow-rumped Warbler 3
Black-throated Green Warbler 13
Blackburnian Warbler 9
Pine Warbler 17
Prairie Warbler 2
Black-and-white Warbler 2
American Redstart 18
Ovenbird 11
Common Yellowthroat 110
Canada Warbler 1 female near nest
Scarlet Tanager 6
Eastern Towhee 49
Chipping Sparrow 27
Field Sparrow 1
Song Sparrow 13
Swamp Sparrow 3
Rose-breasted Grosbeak 5
Indigo Bunting 5
Red-winged Blackbird 8
Common Grackle 8
Brown-headed Cowbird 2
Baltimore Oriole 3
Purple Finch 3
American Goldfinch 14
Posted by Larry at 3:46 PM No comments: 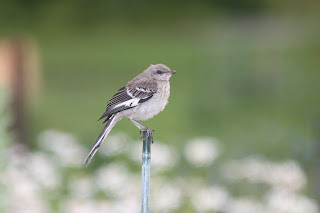 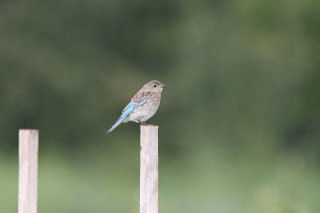 I made a quick stop at a couple locations in Northampton this morning before work to try and catch up with a few birds I had heard about. My first stop was the community gardens in Northampton were I found three Orchard Orioles (one adult female and two juveniles). In addition I had a few Baltimore Orioles, a Scarlet Tanager, Rose Breasted Grosbeak and other species all feeding in the few mulberry trees located in the gardens. Some very nice looks at this birds as they fed on the fruit. In addition there were alot of recently fledged birds around the gardens including mockingbird, house wren, and eastern bluebird

I next stopped briefly at the Merlin nest in Florence and was rewarded with quick looks at young in the nest and the appearance of one of the adults. Not the best looks at the nest but it is over 80 feet in a pine and quite hidden. Only the second nesting record in the state and in an unexpected location in a suburban neighborhood.
Posted by Larry at 5:01 PM No comments:

Another Red Crossbill at Quabbin

During a morning trip through three atlas blocks on prescott peninsula another Red Crossbill was found. This bird was first heard and then seen briefly as it flew by. This bird was a few miles away from where I had a female feeding two juveniles last month. Another neat record for Quabbin. Today almost had a winter birding feel with species such as the crossbill, Evening Grosbeak, Purple Finch, Golden crowned Kinglet, Red Breasted Nuthatch and Winter Wren. These, along with a couple Pine Siskins seen yesterday, certainly remind me of species expected during the winter (or at least looked for!). Other birds of note today included a small Sharpshinned Hawk, a Cooper's Hawk, a Woodcock walking along the road and a Northern Mockingbird (very unusual in this area of Quabbin) Several butterflies of various species also seen as the day warmed up. The usual variety and numbers of ticks which is expected with any trip into Quabbin.
Posted by Larry at 12:27 PM No comments: 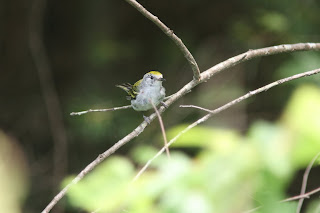 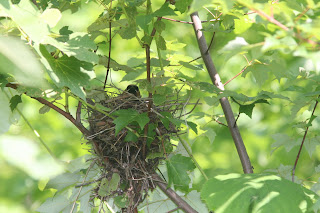 I caught up with a few raptors today between the rain showers. The day started with me rising earlier intending to get out right away but was met with a downpour. I then had to make a trip to Deerfield for an appointment and stopped by Mount Sugarloaf to check on the Peregrines. There was at least one juvenile calling and jumping around the nest (an old ravens nest) and flapping its wings. It eventually took a few short flights around the cliff face. An adult bird came in once to feed and then took back off.

Later in the day along Jabish Canal in Belchertown I found a pair of juvenile Broad winged Hawks being harrassed by a group of crows. I also found a Cooper's Hawk juvenile calling in a grove of pines further along the canal. Many species of birds were represented by juveniles on my walk along the canal including Yellow Warblers, Common Yellowthroats, Blue Gray Gnatcatchers, Gray Catbirds and Song and Swamp Sparrows.
Posted by Larry at 3:36 PM 2 comments:

A new month...and the rain continues. 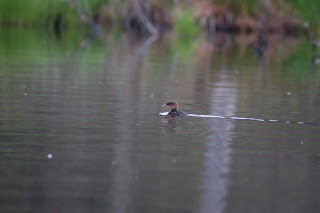 Another day of on and off showers with the occasional thunderstorm thrown in for good measure. Despite the less than ideal conditions the birds continue. A report of a nesting pair of Merlins with young in the nest in Florence is only the second nesting record in the state. Around the house today the pair of House Wrens appear to be putting the finishing touch on their nest. A Broad winged Hawk flew around low this morning, calling several times. Other species of note today include at least three Ruby throated Hummingbirds, a couple kingfishers and the usual variety of warblers and vireos. The Gray Catbirds have now found the rapidly ripening berries and continue to gorge themselves. Finally a group of five young Hooded Mergansers swam by and quickly disappeared in the dense vegetation along the stream.
Posted by Larry at 1:08 PM No comments: