I finally was able to make it up to Montague to check on the Henslow's Sparrow which has been present in a hayfield since at least saturday. There were already maybe 15 birders present when I arrived after work around 8:30am. I was able to get the scope on the bird immediately. He was chased off his perch a few times by Bobolinks but always popped back up again. He was calling quite often throughout my time there. He was a bit too far out in the field for a photo opportunity. When I left a little after nine he was still visible and calling. The bird really put on a good show for everyone there.
Posted by Larry at 8:41 AM No comments: 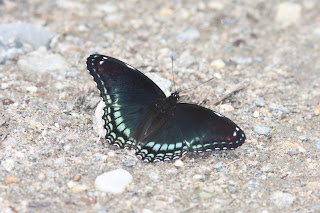 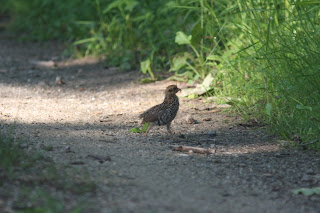 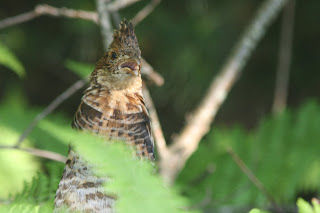 I spent the morning working three blocks for the breeding bird atlas on Prescott Peninsula including the blocks of Shutesbury 8 and 9 and Winsor Dam 1. I covered about 11 miles in about 5 hours. I will include the total list for the morning. Highlights included a Ruffed Grouse w/ two fledglings, a continuing Cerulean Warbler and lots of birds carrying food or feeding recent fledglings. Some birds continue to collect nest material. Also some nice varieties of butterflies around as the sun warmed things up. 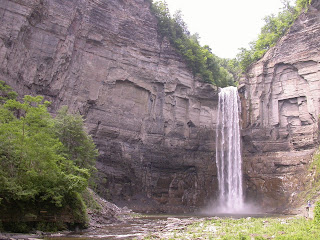 Just returned from a trip out to the Finger Lakes region of New York. It was not a birding trip but instead a get away for our anniversary. However I did manage a little birding at a variety of spots including Montazuma NWR, Tauhannock Falls State Park (where the photo was taken) and the fields and trails around our B&B. Nothing too unusual but it was nice to be out in a new area and have the weather sunny and warm. Now back to the rain at home!
Posted by Larry at 4:29 PM No comments:

Despite the dreary weather conditions and my zombie like feeling today after a rough night of work I still managed a nice sighting today. I had a Willow Flycatcher in the yard...the 131st species here. It was a nice flycatcher kind of day with Alder and Great Crested as well as Eastern Kingbird, Eastern Phoebe and Eastern Wood Pewee.
Posted by Larry at 5:24 PM No comments:

Breeding birds around the yard 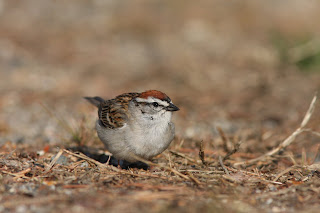 Despite the seemingly never ending rain I have gotten some birds around the house. The House Wren male continues his constant singing, the crows have increased in number to nine including some begging fledglings. A chipping sparrow has been around all day feeding its fledgling too. Various warblers continue to sing around the yard as goes a variety of other birds including Alder and Great Crested Flycatcher, Red Eyed and Warbling Vireo, Scarlet Tanager and Rose Breasted Grosbeak. My female Ruby throated Hummingbird has been largely absent as she likely sits on eggs but a male has been around all day. Lots of activity despite the rain.
Posted by Larry at 1:30 PM 2 comments:

It seems to be a broken record lately. Another all day rain event. Hopefully the forecast will be right and we will get at least some dry weather tomorrow. Keeping my fingers crossed....
Posted by Larry at 5:34 PM No comments: 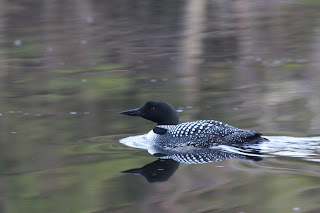 Yesterday I spent the better part of a beautiful day assisting DCR biologists with Common Loon nesting counts at Quabbin Reservoir and scrubland research. We began the day around 6 doing point counts we started last week. A similar cast of characters were seen and heard today. The main addition was at the end of our first counts we passed by a large marshy area which contained both Hooded Merganser and Wood Duck fledglings. The Hooded Merg's were almost as big as the adult female but the Wood Ducks were tiny, very recently fledged. One additional trip this season will have to be made to this plot to wrap up the research for the season. We then went to a new survey plot area which is in a proposed site for a clear cut. Following the completion of this survey we returned to the DCR HQ building to pick up our boat to begin the loon count.

We launched out of the boat area in New Salem and went as far south as Boat Launch area 3. We were on the water for approximately four hours. We found a total of 10 different loons with two definite nests found. Another couple areas were highly suspicious of nesting but nothing could be found. According to the biologist the loons have not had much luck nesting this season with several nest failures noted. We also had two Bald Eagle nests each containing two large nestlings that looked about ready to leave the nest. There were also several Common Mergansers with a least three young. A very productive and enjoyable day at Quabbin on one of the nicest days in weeks.
Posted by Larry at 3:30 AM No comments:

House Wrens at the house 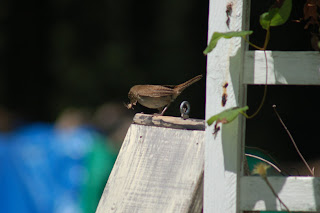 Given the weather and work I have been unable to get out in the field the last few days. I have had to be happy with the breeders in the yard. The local House Wrens are busy tending to some young and an unattached male continues to sing quite a bit.
Posted by Larry at 3:54 PM 2 comments: 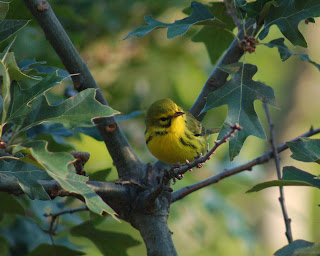 Today I joined a biologist from the state and from the US forest service in setting up test plots on a five year old clearcut and nearby forest that will be clearcut later this year. The main aim of this study is to determine the species content and number in both habitats and how they change with the additional clearcut. The hope is that the addition of more scrubland type habitat will increase the numbers of some declining species such as Prairie Warbler, Chestnut Sided Warbler, Eastern Towhee, Field Sparrow and Indigo Bunting. We laid out the plot points today and did our first point counts. Highlights included nests of Prairie and Chestnut Sided Warblers, Common Yellowthoat and Gray Catbird. We also had a pair of Broad winged Hawks and a Red Shouldered Hawk. We will do two more visits this season.
Posted by Larry at 1:55 PM No comments: 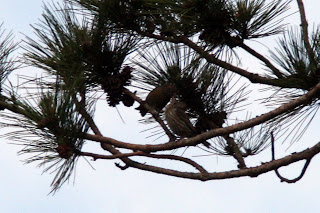 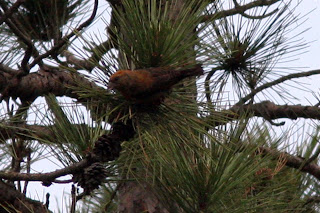 The following photos were taken on June 3 in a restricted area of Quabbin. I was in the area with a permit working on the Massachusetts Breeding Bird Atlas. The three birds (one adult female and two juveniles) flew into a pine and the adult female fed the juveniles on several occasions. The area in which these birds were seen is quite remote. A truly unique breeding record for Massachusetts. Also in the area of these birds were a variety of other interesting breeders (or possible breeders) including Cerulean Warbler, Worm eating Warbler and several Whip Poor Wills among others.
Posted by Larry at 10:49 AM No comments:

Email ThisBlogThis!Share to TwitterShare to FacebookShare to Pinterest
Labels: Red Crossbills at Quabbin

I have always wanted a forum to share my observations as I bird around the area and the country and I have finally gotten around to creating this blog. I am not sure how it will work out but thought I would give it a try. Hopefully I will figure this out fairly rapidly and provide some interesting stuff for people.
Posted by Larry at 10:33 AM 2 comments: