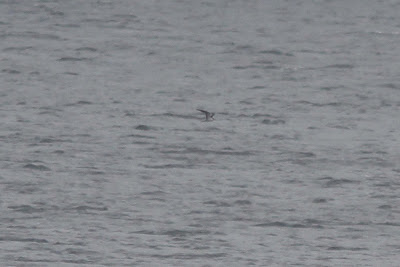 White-tailed Tropicbird 1     adult, first seen heading from hills of Quabbin park toward main reservoir, rest of group got on bird that then settled into water (a first county record and one of only a few live individuals ever seen inland in the northeast...my find of the day!)
Black-bellied Plover 1      one bird in with group of eleven Hudsonian Godwits
Whimbrel 1     bird heard calling several times
Hudsonian Godwit 11        One group moving down the reservoir with one Black bellied Plover
Ruddy Turnstone 4     group together with one Baird's Sandpiper
Baird's Sandpiper   1   w/Ruddy Turnstones
Sooty Tern 1    One adult seen well, possibly another far in reservoir
Black Tern 3    together in one group, far out
Common Tern 2
Sterna sp. 2     possibly common, unknown
Parasitic Jaeger 1    one seen by itself early in watch
jaeger sp. 2 far out, probably parasitic

The storm had heavy rain and some wind but not as much as predicted for here.  The worst of the rain was just to our west and the winds were worse on the coast and to the east.  The storm hit the area as a tropical storm with the remnants of the eye passing west of us through Berkshire county.  The heavy rain lasted until midday to be followed by occasional showers and mist through early afternoon.  The birds came in fits and starts.  All the shorebirds were moving south and passed over the dam.  Additional shorebirds were unidentified and may have included additional godwits.  In addition other birds seen while I was not present included Leach's Storm Petrel, Bonaparte's Gull, American Golden Plover and a few more Common Terns and Black-bellied Plovers.  I was joined at Winsor Dam by Marshall Iliff and Scott Surner for the entire time I was there.  Other birders arrived after news of some of our sightings made it out.  I managed to add two life birds, four state birds and seven birds to my Hampshire county list.  It was a truly spectacular birding day that I will remember for a long time.  Unfortunately I managed very few photos for the day due to weather conditions and the distance of many of the birds.
Posted by Larry at 3:58 PM No comments: 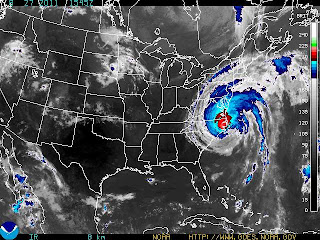 Hurricane Irene continues he journey north as a category 1 storm.  It is expected to come right up through the Connecticut River valley and therefore right through the neighborhood!  The predictions are for heavy rains (6" or more) and winds up to hurricane strength.  The only silver lining is the potential for rare birds to show up with this storm.  I'm hopeful the damage will be slight and the birding great.  I will update when I can.  The expectation is to lose power for the day and possibly longer.  A great link to hurricane birding can be found here:


UPDATE:  Made two stops at Winsor Dam at Quabbin Park to see if any birds came in with the first rain bands.  I had a sterna species (possibly Common Tern) flying away at quite a distance and moving north not to be seen again.  In addition had a flight of 37 Common Nighthawks move east to west between the rain bands.  No other storm related birds but did have a few Common Loons, cormorants, three adult Bald Eagle, lots of Ring-billed Gulls and at dusk 65+ Mallards and a smattering of Wood Ducks and Hooded Mergansers.
Posted by Larry at 9:52 AM No comments:

Common Nighthawks in the morning...

I managed to add not one, but two new yard birds to the yard list today bringing the total on our two acres to 145.  I added a flyby Bobolink this morning and added a couple Great Black-backed Gulls this evening.  I was amazed to add two new birds today.  I guess there are advantages to being stuck at home sometimes!
Posted by Larry at 3:43 PM No comments: 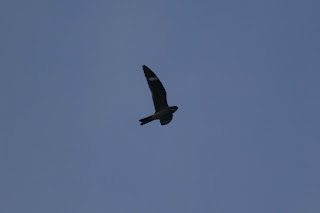 Common Nighthawk, Belchertown, MA, Aug 18, 2011
The migration season has begun as the annual arrival of Common Nighthawks from points north has started.  Although shorebirds started moving south in July the arrival of nighthawks always signals the end of summer and the beginning of all to me in the interior of Massachusetts.  I had a total of 82 Common Nighthawks last evening but probably missed a few while I got dinner ready.  I managed a few photos of these fast flying birds.
Posted by Larry at 8:52 AM No comments: 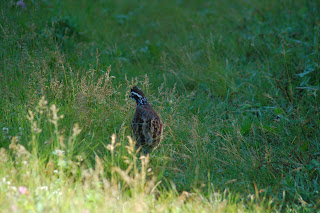 Northern Bobwhite, Covey WMA
I made a short trip out yesterday to get some time outside on a beautiful late summer day. I walked a short distance around the Covey WMA in Belchertown. Some nice stuff around including two Red-shouldered Hawks with a Broad-winged Hawk, several Boblinks, a couple Northern Bobwhites, and others. The list for the day is below. 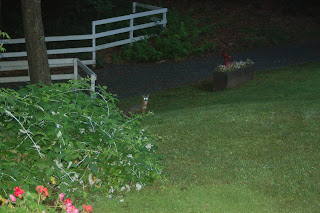 Sorry for the poor quality of the shot but I didn't have the good camera handy and it was 5:30am.  I originally saw this guy as I looked out the kitchen window.  He stayed long enough for us to get good looks and to lean out the door to the deck and get a quick picture.  I took the sighting as a good omen on the morning of some surgery I had scheduled.  The surgery went well and I'm now home recovering.  I hope to get out at least a little by the end of the week...it is tough to stay down when you love to be outside!
Posted by Larry at 11:55 AM No comments: 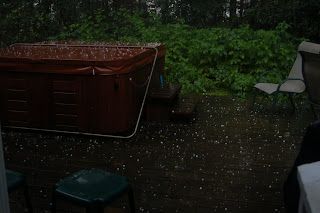 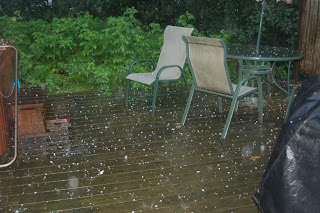 The severe weather continues for another day here in western Massachusetts.  This time the big problem was hail.  It was the worst hail storm I have had here at the house with the largest stones almost the size of ping-pong balls!  Really amazing to see.  The hail fell for almost 25 minutes at varying intensities.  We were luck to escape with no real damage besides some foliage taken down.  The power of nature always impresses.  I'll upload some photos of it all a bit later.
Posted by Larry at 3:36 PM No comments: