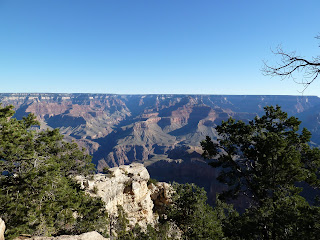 Grand Canyon National Park, Arizona, October 26, 2010
Just returned from a trip out to central and northern Arizona. Although not a birding trip, I managed to get birding in most days for at least a little while. Spent the week in Sedona with a few trips up to the Grand Canyon. I will post some photos and some trip accounts over the next week or so. Here is one view of the spectacular Grand Canyon.
Posted by Larry at 6:48 AM No comments:

Following a cold front yesterday afternoon that brought strong winds, hail and a double rainbow the weather today had a very fall feel to it. The temperatures never made it much above 50 and the wind stayed strong all day long. After several days of not getting much birding in I made a stop in the afternoon at Winsor Dam to see if any waterfowl was out on the reservoir. Despite the winds and heavy chop I found a couple Gadwalls with a group of a dozen Black Ducks. I also had a couple adult Bald Eagles including one that made a low pass by me and then fought the wind to move back north.
Posted by Larry at 1:28 PM No comments: 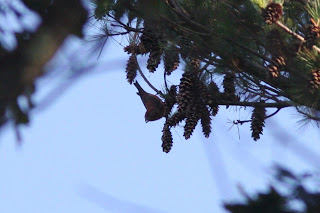 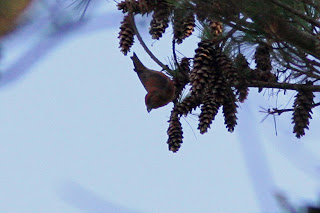 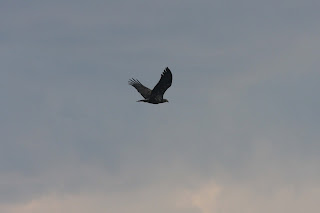 I spent the last couple days exploring areas at Quabbin including Quabbin Park, Gate 4 and Gate 16. Yesterday was quite breezy and cool following a nor'easter. The highlights of yesterday included a late Red eyed Vireo at Gate 4 and four Horned Grebes at Quabbin Park.
Today I started at Quabbin Park at dawn and had a handful of waterfowl including five Horned Grebe, four Common Loons, a lone Common Mergansers plus Wood Ducks, Mallards and Canada Geese. In addition the juncos continued to increase in number with a minimum of 108 counted this morning. Also had a Eastern Towhee and a Chipping Sparrow still hanging out near Quabbin Tower. The best birds by far here were not waterfowl but a group of three Red Crossbills seen and heard feeding in pines in roughly the same area I had White winged Crossbills last week. I managed a couple of record shots but I was very happy just to get these photos as the birds fed at the tops of the pines. I also had my first of season Pine Siskins today.
Posted by Larry at 10:26 AM No comments: 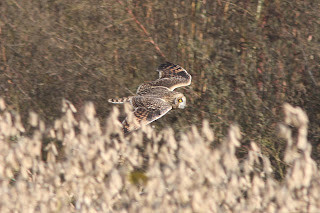 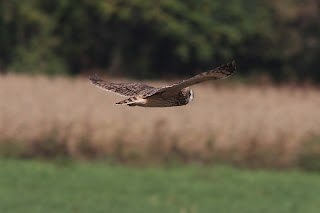 Short eared Owl, Honey Pot, Hadley, MA October 11, 2010
I spent the morning of Columbus Day checking various areas for sparrows and other late migrants. Although the total numbers of birds were down slightly there are still a lot of birds around. The highlight of the morning was a Short eared Owl I flushed from just off the road at the Honeypot in Hadley in mid morning. I spent the first couple hours of the day at Arcadia Meadows and then briefly onto Aqua Vitae Road in Hadley and then over to the Honeypot. I managed a total of nine species of sparrows with the best being Vesper and Field. Many other nice birds such as Eastern Meadowlark, lots of Yellow rumped Warblers, various raptors with some very active Sharp shinned Hawks. 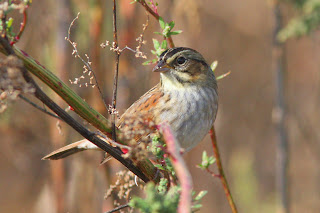 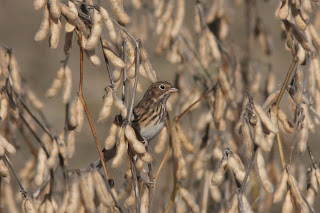 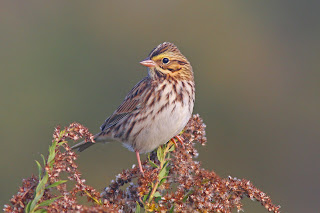 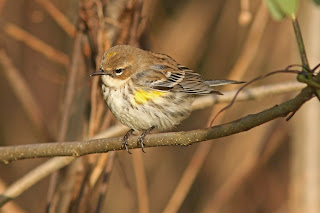 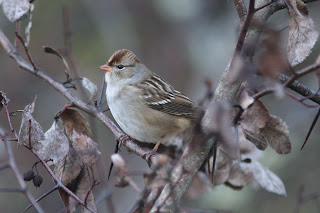 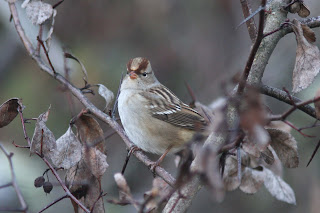 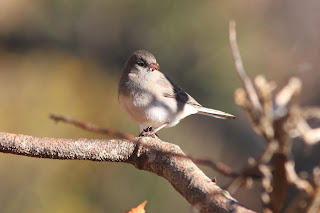 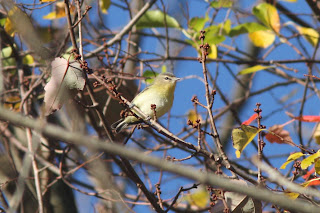 Another great day at Quabbin. I started at dawn at Quabbin Park and had a pair of dueting Great Horned Owls. The highlight here, and of the day, was a group of 22 White winged Crossbills. I first heard them and a then got to see them as they flew around only to resettle in pines out of view. They repeated this behavior several times before going on to parts unknown. This was totally unexpected and made my day. In the same area of Quabbin Park I also had a slightly late Philadelphia Vireo. I then went on to Gate 45 and had my first of season Pied billed Grebe and Ring necked Ducks plus a calling Eastern Screech Owl. There were other high points of the day such as a River Otter on a beaver lodge, almost forty Wood Ducks on a small pond, cooperative White crowned Sparrows, etc...the list goes on and on.
Posted by Larry at 3:53 PM No comments: 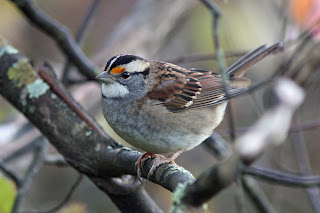 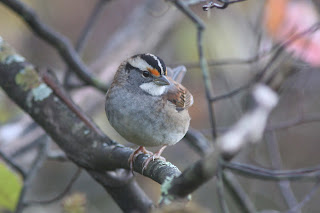 White throated Sparrow with orange lores, Jabish canal trail, Belchertown, October 9, 2010
I came across this unique looking individual in a weedy area along the Jabish Canal yesterday and was lucky enough to get a few shots off before he disappeared not to be seen again. It is a color variation I have never seen before in a White throated Sparrow. The usual yellow lores replaced by bright orange certainly drew my attention right away. I expected the change was diet induced and a quick search on the web confirmed my suspicions. There are records of White throated Sparrows with orange lores. Most of these are of birds captured during banding operations. The likely suspect for the color change is best described by the following excerpt
"Orange coloration in place of yellow is most readily observed in the terminal tail band of Cedar Waxwings (Bombycilla cedrorum). This was first seen over 30 years ago, and has since been traced to the ingestion of rhodoxanthin, a red pigment found in the berries of an introduced shrub, Morrow�s Honeysuckle (Lonicera morrowii) (Hudon and Brush 1989, Witmer 1996). The pigment must be consumed during feather development in order to result in altered plumage coloration" (Craves, J.A. 1999. White-throated Sparrow with orange lores. Mich. Birds Nat. Hist. 6:87-88). 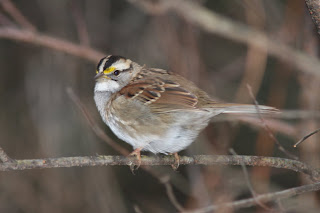 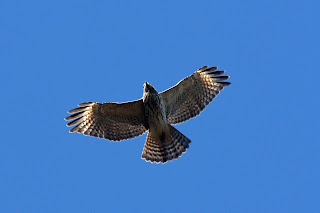 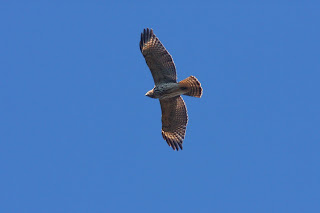 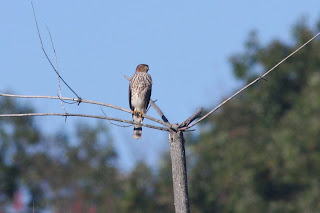 
Another beautiful day in October with some great birds as I visited Quabbin Park, Gate 4 and a trail along Jabish Canal. The morning started with a calling Great Horned Owl at Quabbin Park which I then added a calling Barred Owl and Eastern Screech Owl to also. The waterfowl variety continues to increase with my first of the season Black Scoters, Surf Scoters and Horned Grebes at Quabbin. Oddly I had four of each of the above mentioned species with all the scoters being males. In addition a half dozen Common Loons in various plumage types added more variety to the waterfowl. The bird variety continues to change with each passing day with less and less birds of summer left. I did manage five species of warblers with a beautiful Black throated Blue male being the highlight. Yet again the number of sparrows continues with the highlight being an oddly colored White throated Sparrow male which had the normal yellow coloration near its eye replaced with orange (I'll post a more detailed description and photos in another post). The raptors also made for some great viewing with the highlight being two Red shouldered Hawks soaring overhead over a swamp along the Jabish Canal. Another great day to be outside enjoying the fall weather.
Posted by Larry at 1:48 PM No comments: 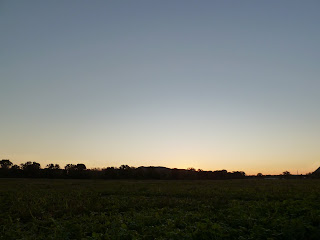 
Spent two hours this morning before work at Arcadia Meadows primarily looking for sparrows and I found them! I also had a nice raptor show and seven species of warbler. I'm a bit tired so I'll let the list speak for itself.

Despite the forecast for rain for the day I managed to get some birding in and only got dripped on a few times. Given the north winds and then pre dawn rain I was hopeful to find some grounded birds at Quabbin. I stopped several times at Winsor Dam throughout the morning and finally was rewarded with a group of White winged Scoters. There were a total of 14, all males. The only additional waterfowl sighting here was a Common Merganser and some flyby Canada Geese. The Route 9 marsh held some nice birds with a total of 34 Wood Ducks and the expected Mallards and Canada Geese. I also walked at the Covey WMA and had some nice birds including a couple of late Broad winged Hawks together (adult and juvenile) plus a couple Osprey. The north winds certainly seemed to be moving the Blue Jays along on their migration today. I counted a total of 366 in just over an hour. They were moving by in large and small groups. It will be interesting to see what totals some of the hawk watches come up with for jays.
Posted by Larry at 10:29 AM No comments:

Quabbin gates and shorebirds in the East Meadows 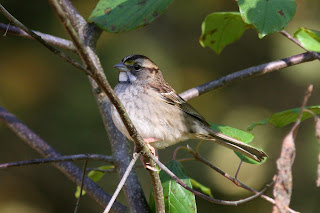 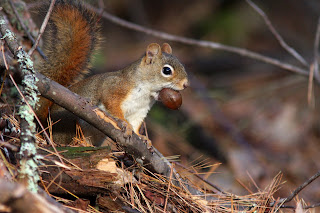 Red Squirrel, Quabbin Gate 29
Another night of north winds continued to carry out the birds of summer and replace them with the birds of fall and winter. The morning started off quite chilly with a couple of small patches of scattered frost. Once the sun rose the temps increased a bit but today certainly had a true feel of fall with the temperature topping out in the high 50's with a breeze. I debated on where to go this morning. I had thoughts of trying for the shorebirds seen yesterday in the East Meadows or try Arcadia again to give a more thorough check of the area. I was afraid the meadows may be flooded and I figured the shorebirds would have gone last night so I decided on a trip to the western gates of Quabbin visiting Gate 22, 29 and 16. The highlight of these stops included a group of eight Rusty Blackbirds at Gate 29. Upon arriving at home I had a message saying the shorebirds including Dunlin, Pectoral, White rumped and Semipalmated Plovers were still in the East Meadows as of 9:45. It was now 11:30 but I figured I would give it a try. I missed on some but did find a few including White rumped and Pectoral. In addition there were many Yellow rumped Warblers, various sparrows and a handful of American Pipits. I will add more of the day later when I have some time.
Posted by Larry at 2:10 PM No comments: 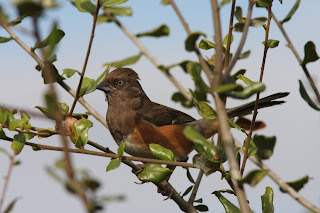 I made a trip over to Arcadia Meadows starting at dawn, staying for a bit under two hours. The north winds of last night cleared out many warblers and vireos but brought in many sparrows. I only had a limited time to explore this large area and missed many spots but still had large numbers of various species. The day started off with at least five American Woodcocks flying around and calling at dawn. It was more like a spring morning then a fall one. An Eastern Screech Owl calling back to me was the next exciting event. Now for the sparrows. Here is a list of sparrows and grassland birds for the morning and the numbers are minimums.


Also had some raptor activity with a Bald Eagle, Kestrel, at least three Cooper's and at least two Northern Harriers.

Although many warblers have moved on I still managed seven species for the morning.