return back to Winsor Dam between the rain showers

The rained seemed to let up briefly so I took a quick ride over to Winsor Dam and was rewarded with a nice tight group of scoters. All three species were represented including a single Surf Scoter, seventeen White winged Scoters and thirty one Black Scoters. The most interesting among them was what appeared to be a partial melanistic white winged scoter. The rain then immediately picked back up again and sent me backing after getting soaked again.
Posted by Larry at 1:24 PM No comments:

In between the rain showers this morning I managed to get out and explore a few spots including Quabbin Park and gate 5. I had hopes of finding some waterfowl given the weather and had some luck. I managed a total of nine Common Loons at Quabbin Park plus a trio of White winged Scoters and a couple Horned Grebes one of which called several times as it swam not more than 30 feet from me. There was also a large (700+) mixed flock of grackles, blackbirds and cowbirds feeding along the shore of the Rt 9 marsh.

At gate 5 I made it down to the shore just in time to have the rain start back up in earnest. Despite getting soaked I had a good little walk with a trio of Long tailed Ducks (two males) and a pair of loons and three white winged scoter (probably same ones sighted from Winsor Dam)

Due to the weather I was not able to get any photos for the day...maybe tomorrow?
Posted by Larry at 10:05 AM No comments: 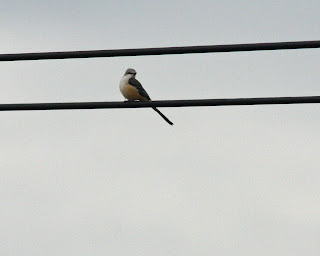 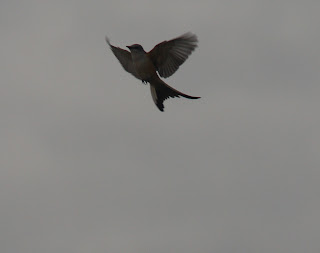 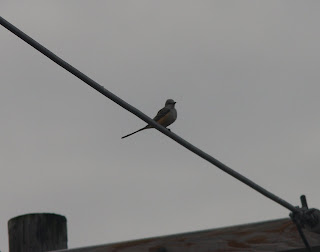 I made a trip up to the Orange Airport this morning to try for the Scissor-tailed Flycatcher that was discovered there yesterday. I arrived a bit after six and joined a handful of others looking for the bird. It was not present until about 7:40 or so. I started calling from a group of trees nearby and then flew out to begin feeding. It was quite vocal throughout the time I was there. Besides this nice bird there were a few other highlights including a handful of American Pipits, a kestrel and a Coopers hawk. I stayed until about 8:20 and the bird was still there and quite active when I left.
I then stopped at Gate 22 and had a couple Winter Wrens, a Common Yellowthroat and dozens of White throated Sparrows among the other birds.
The Scissor tailed was well worth the trip up to see it.
Posted by Larry at 12:10 PM 3 comments:

I have stopped by Winsor Dam around day break the last few days before work and have been rewarded with a few good birds. Every morning an adult Bald Eagle is perched on a dead snag on the west side. A Red necked Grebe, a Common Loon, a few Common Mergansers and a variety of sparrows round out the sightings from my quick stops.
Posted by Larry at 4:01 PM No comments: 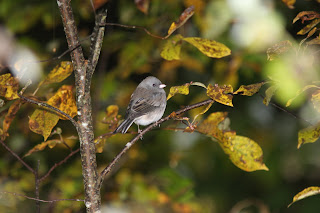 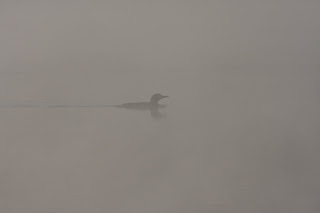 I spent a frosty morning checking gates 22 and 16. I only went a short distance down gate 22 road and totalled 90+ White throated Sparrows. Certainly a big influx of these with the passage of the latest cold front. Gate 16 had some nice variety of birds but only one species of warbler, Yellow rumped. The numbers of Junco's here totalled over 20 plus a nice selection of sparrows. I walked the length of gate 16 road and watched a steady steam of Blue Jays migrating south along with several small flocks of Canada Geese. There was a few raptors moving south also including a male Northern Harrier.

A brief walk at midday along Winsor Dam among the throngs of leaf peepers turned up some nice birds including a single American Pipit, a Bonaparte's Gull and a close Bald Eagle.
Posted by Larry at 3:36 PM No comments:

Quabbin Park in the fog 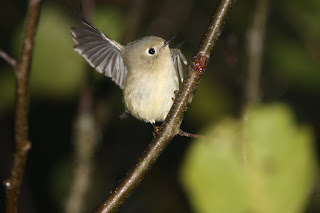 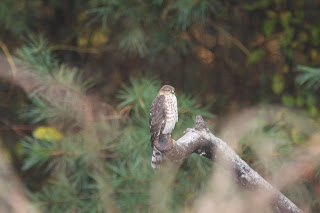 I spent a few hours this morning exploring Quabbin park before the area got the big influx of people leaf peeping. The fog really hung in this morning, especially around Quabbin Tower. I still managed a couple Lincoln's Sparrow and a Field Sparrow up there among the more usual Song, White throated and Swamp. The warbler numbers and variety continue to drop as the fall moves on. Only five species of warbler today. The big influx today seemed to be Ruby crowned Kinglets with a total of over 50. Hermit Thrushes also were around in good numbers with a total of 16 seen. Not much for waterfowl as of yet but did have a few Black Ducks and a couple of Loons out on the reservoir. I had a close encounter with a juvenile Sharp shinned Hawk and got to see what would probably be the last thing a prey item ever sees. I was in a brush dump area checking for sparrows and the Sharp shinned made a beeline for me and only broke off its flight about three feet away. I think it was trying for a House Wren right next to me but I couldn't help but feel it was heading right for me. It then landed about 15 feet away and stayed there for several minutes.
Posted by Larry at 9:45 AM 2 comments:

Finally was able to get out for a little this morning and see what is still around. I managed nine species of warblers with the highlight being an Orange crowned at gate 22. Others included Nashville and parula. Also a Scarlet Tanager was mixed in at gate 22. The influx of new birds continues with a nice number of Ruby crowned Kinglets as well as some Golden crowned's. Sparrow numbers also continue to grow with ever increasing numbers of White Throats, Song and Swamp. A smattering of raptors rounded out the morning.
Posted by Larry at 3:27 PM No comments: